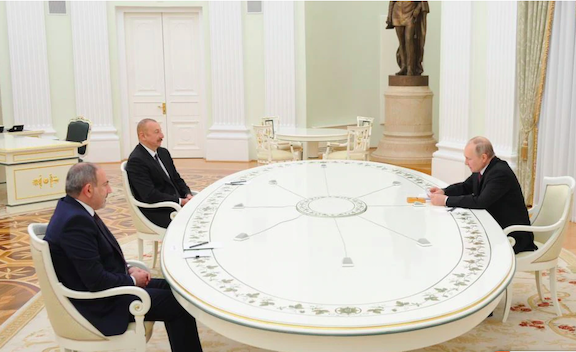 Meeting of leaders of Armenia, Azerbaijan and Russia opens an opportunity for the development of local transport

On Monday, January 11, for the first time since the end of the war in Nagorno-Karabakh, Armenian Prime Minister Nikol Pasinjan, President of Azerbaijan Ilham Aliyev and Russian leader Vladimir Putin met to discuss the regulation of the post-war situation in the region. The result of their negotiations is a four-point agreement on the renewal of transport infrastructure between the participating states.

With respect to the ceasefire agreement of November 10, 2020, the three leaders committed themselves to create a transport corridor connecting Azerbaijan with its exclave the Autonomous Republic of Nakhichevan through Armenia. In return, Azerbaijan should allow Armenia a rail link to the south of the country via Nakhichevan and on to Iran as well as a direct rail link between Armenia and its ally Russia through its territory.

The working group will be set up to implement these projects, chaired by the Deputy Prime Ministers of Armenia, Azerbaijan and Russia. It is scheduled to meet for the first time on January 30 and is due to submit a series of projects to the three countries‘ governments for consideration by March 1 the latest. 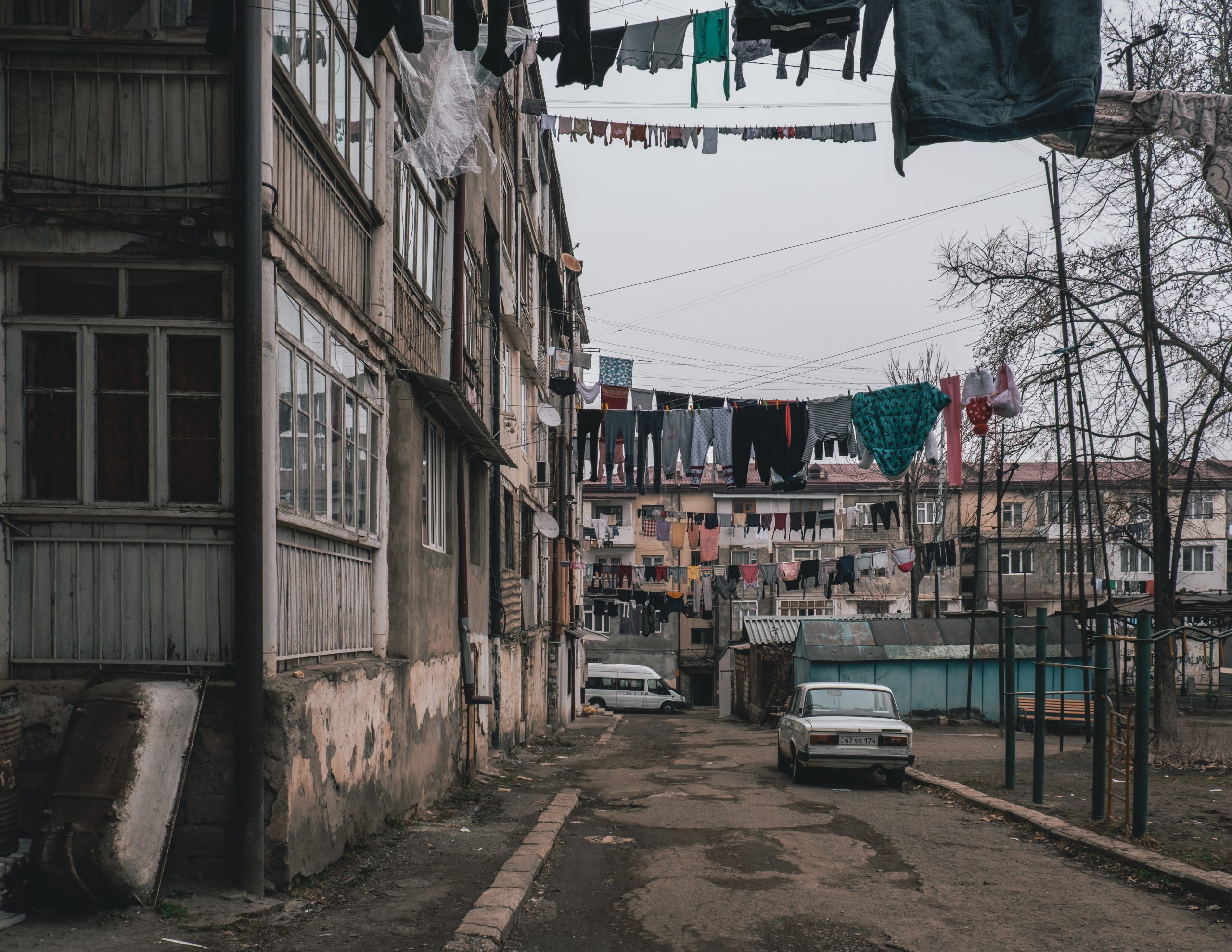 On January 12, President Ilham Aliyev signed a decree “on deepening media reforms in the Republic of Azerbaijan”, rising concern among local journalists.

The newly established Azerbaijani Agency for Media Development will replace the State Support Fund for Mass Media Development. Due to the official statement, the new agency should “support the development of the media in Azerbaijan, continue institutional building in this area, and stimulate the introduction of new information and communication technologies and innovations”.

Mehman Aliyev, the director Baku-based news agency the Turan Information Agency and a regular government critic, told OC Media that the new agency would have a broader mandate than the previous body, taking the broader supervisory role, including monitoring social media.

In his article, published on Turan, Aliyev wrote that he found “elements of censorship” in several new law articles. The agency will also be responsible for checking if “information disseminated in the online media does not meet the requirements provided by law” and “to take measures in accordance with the Code of Administrative Offenses of the Republic of Azerbaijan in case of detection of signs of administrative error in the field of print and online media, and in case of signs of crime to provide relevant information”, cites OC Media.

Meanwhile, the new media law is also being drafted by the President’s Administration for the submission for President’s review in two months.

34,000 people left homeless in Nagorno-Karabakh as a result of the recent war

De facto Ministry for Employment, Social Issues and Migration of Nagorno Karabakh has launched a programme for the resettlement of refugees who lost their houses in the course of the recent war.

According to the de facto minister Mane Tandilyan at present, the authorities are being engaged in solving the housing problems of residents of rural communities in the Askeran, Martuni, Martakert, and Shusha District. Houses will be handed over to the villagers after renovation and with furniture, and the people will also get the opportunity to be engaged in agriculture.

Approximately 8000-10,000 premises are needed to accommodate people who lost their homes due to the war, writes the Caucasian Knot. 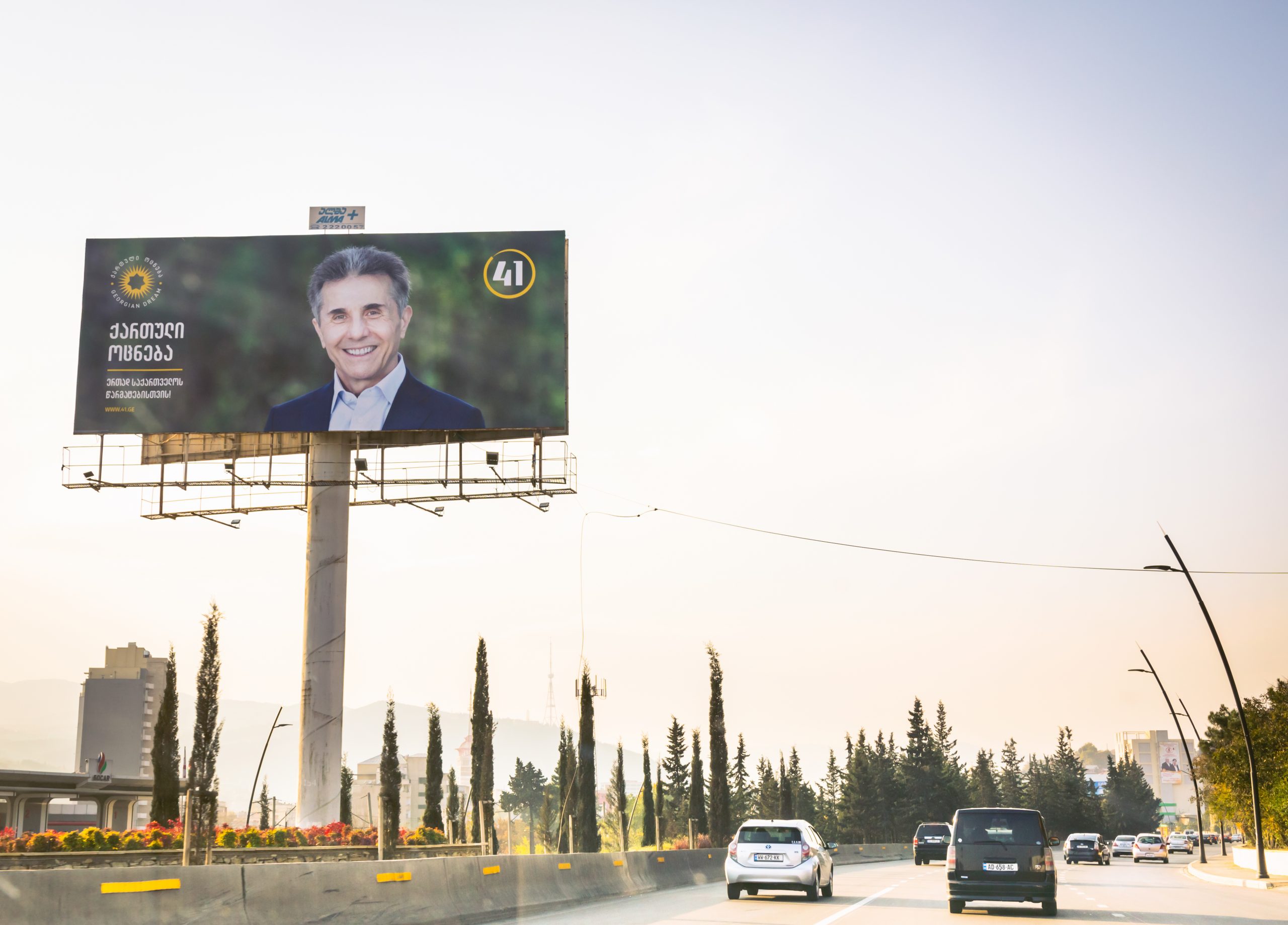 Ruling Georgian Dream party chairman Bidzina Ivanishvili stated in a lengthy January 11 letter that he quits the party chairmanship, the party itself and politics “for good.” Billionaire leader claimed he had achieved everything he wanted to.

“I believe that my mission is accomplished, so I’ve decided to step out of politics for good and fully give up the reins of power,” the billionaire said in a 17-page letter, citing his age as another reason for the departure. “I’m leaving the party itself, and I’m going back to the private life that I had before 2011,” he added.

“I made the decision to leave the party permanently and completely retire from running it. I am leaving both the post of party chair and the party itself and will return to normal life, as it was before 2011“, he wrote. Ivanishvili also stressed that there was currently no alternative to Georgian Dream, citing the party’s unprecedented third term in power following October’s parliamentary elections.

Some opposition representatives speculated that billionaire left politics amid pandemic and severe economic crisis to avoid blame if the situation worsens even more. “Isn’t it a paradox for the leader of a “winning” party to quit politics a month or two after the victory?” asked Anna Natsvlishvili, spokesperson for an opposition party Lelo. Salome Samadashvili, a United National Movement (UNM) member, agrees. “Ivanishvili decided to distance himself from the situation we have in the country. We have a major economic and social crisis ahead of us and, obviously, this team [Georgian Dream] will not be able to handle it,” she said.

As Eurasianet reminds in its article, some experts believe that Ivanishvili simply wants to unburden himself of the formalities associated with his position as party chairman. “We saw his second coming, and now we are witnessing his second leaving,” political commentator Gia Khukhashvili told Mtavari Arkhi TV. “We need to wait and see how it plays out. For now, it is a bit hard to believe as left in charge is a prime minister who was not even allowed to pick his own cabinet.”

Ivanishvili announced his first departure from politics in 2013, just a year after being elected prime minister. However, critics continued to insist he maintained control over the ruling party from behind the scenes. Five years later in 2018 Ivanishvili took over as chair of the ruling Georgian Dream party. He said that time; his motivation was “the well-being and a worthy future of the Georgian people”.

After a brawl over the construction of a mosque in Georgia’s Guria region on January 12, two persons have been hospitalized, and their fellow villager detained, informed Caucasian knot news portal.

The incident broke out in the village of Buknari of the Chokhatauri Municipality over the local Muslim community’s decision to build a mosque in the village causing uproar among local Christians. The brawlers threw stones at each other; both victims are Muslims.

Three days later the dispute was resolved peacefully as the conflicting sides have agreed that the Muslim community will not construct the mosque, and Christians will not interfere their prayers in the house which local Muslims bought a year ago for religious services.

„Of course, we [the conflicting sides] reconciled… I believe that we will continue to live peacefully. We don’t want to talk about misunderstanding anymore“, said a representative of the local Muslim community, Nugzar Chaghalidze. Local Christian Mariam Kheladze added that „wisdom and the love „Muslim and Christian locals had for each other won and she hopes for this love.“ The Muslims of the Buknari village have also noted that religion should not be the reason for inequality among the villagers: all residents are „Georgians and brothers“ and should live in peace and harmony.

The Muslim community has been living in the village for Buknari for several decades. They settled from the highland villages of Adjara and Guria regions 70 years ago. Currently, they represent half of the local community.

European Court of Human Rights (ECHR) ruled on January 21 that Russia was responsible for the breach of six articles of the European Convention of Human Rights, as well as for the failure to conduct an effective investigation into the alleged breach of the right to life, in the aftermath of the Russo-Georgian War of August 2008.

“[T]he very reality of armed confrontation and fighting between enemy military forces seeking to establish control over an area in a context of chaos not only meant that there was no ‘effective control’ over that area but also excluded any form of ‘State agent authority and control’ over individuals,” reads the January 21 ruling. The situation changed once the fighting stopped, the Court ruled: “After that period, the strong Russian presence and the South Ossetian and Abkhazian authorities’ dependency on the Russian Federation indicated that there had been continued ‘effective control’ over South Ossetia and Abkhazia.”

As Eurasianet stressed in its article, the ruling continued: “Despite the order given to the Russian armed forces to protect the population and carry out peacekeeping and law-enforcement operations on the ground, the measures taken by the Russian authorities had proved insufficient to prevent the alleged violations. This could be deemed to be ‘official tolerance’ by the Russian authorities, as was also shown by the fact that the latter had not carried out effective investigations into the alleged violations.”

Although the ruling has no practical effect and no penalty was imposed, Tbilisi celebrates another symbolic victory over Russia. Georgia appealed ECHR on August 11, 2008, a day before the EU-mediated six-point ceasefire agreement was signed with Russia. At that time, Russia dismissed allegations as unjustified and unconfirmed by “admissible evidence,” claiming its military forces did not attack and instead defended Tskhinvali region’s civilian population against the Georgian offensive. ECHR declared the application admissible in December 2011, relinquishing the case to the Grand Chamber, which consists of 17 justices.

As Civil.ge reminds, this was the second inter-state case of the total three against Russia in the Strasbourg-based Court. Georgia won the first in 2014 when ECHR ruled that the arrest, detention, and collective expulsion of Georgians from Russia in 2006 violated the Convention. In a follow-up decision in 2019, the Court ruled Russia had to pay EUR 10 million in compensation for damages related to the mass deportation. 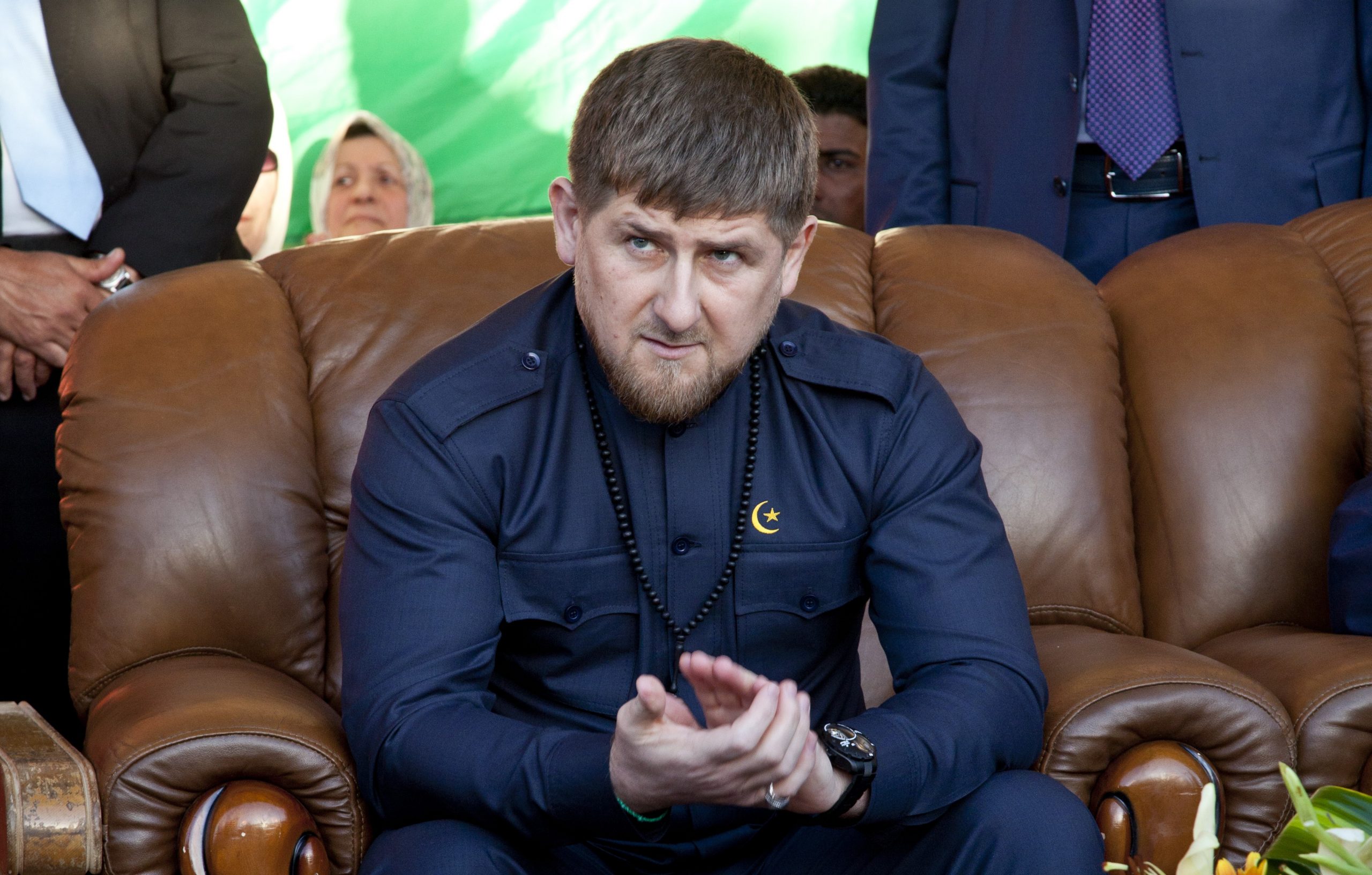 On October 13, 2020, in the Oktyabrsky district of Grozny, a counter-terrorist operation regime was introduced for the first time since December 2016. As a result, security forces managed to kill six militants. The fighting also claimed the life of Aslan Byutukaev, the only remaining Chechen insurgent of significance.

„On the outskirts of Qatar-Yurt’s village, a special operation was carried out, as a result of which six militants of Aslan Byutukaev’s group, who were on the federal wanted list, were killed; none of the militants managed to escape,“ said the leader of Chechen republic Ramzan Kadyrov in his statement.

Kadyrov further stressed that after the killing of six militants, the task of restoring order in Chechnya was completed. „The bandit underground in the Chechen Republic is completely finished!“ – he declared.

However Russian scholar Alexey Malashenko told Caucasian Knot, that it is premature to talk about the definitive demise of the militant underground in Chechnya, as a young generation is growing up in the republic, dissatisfied with the policy of the authorities.