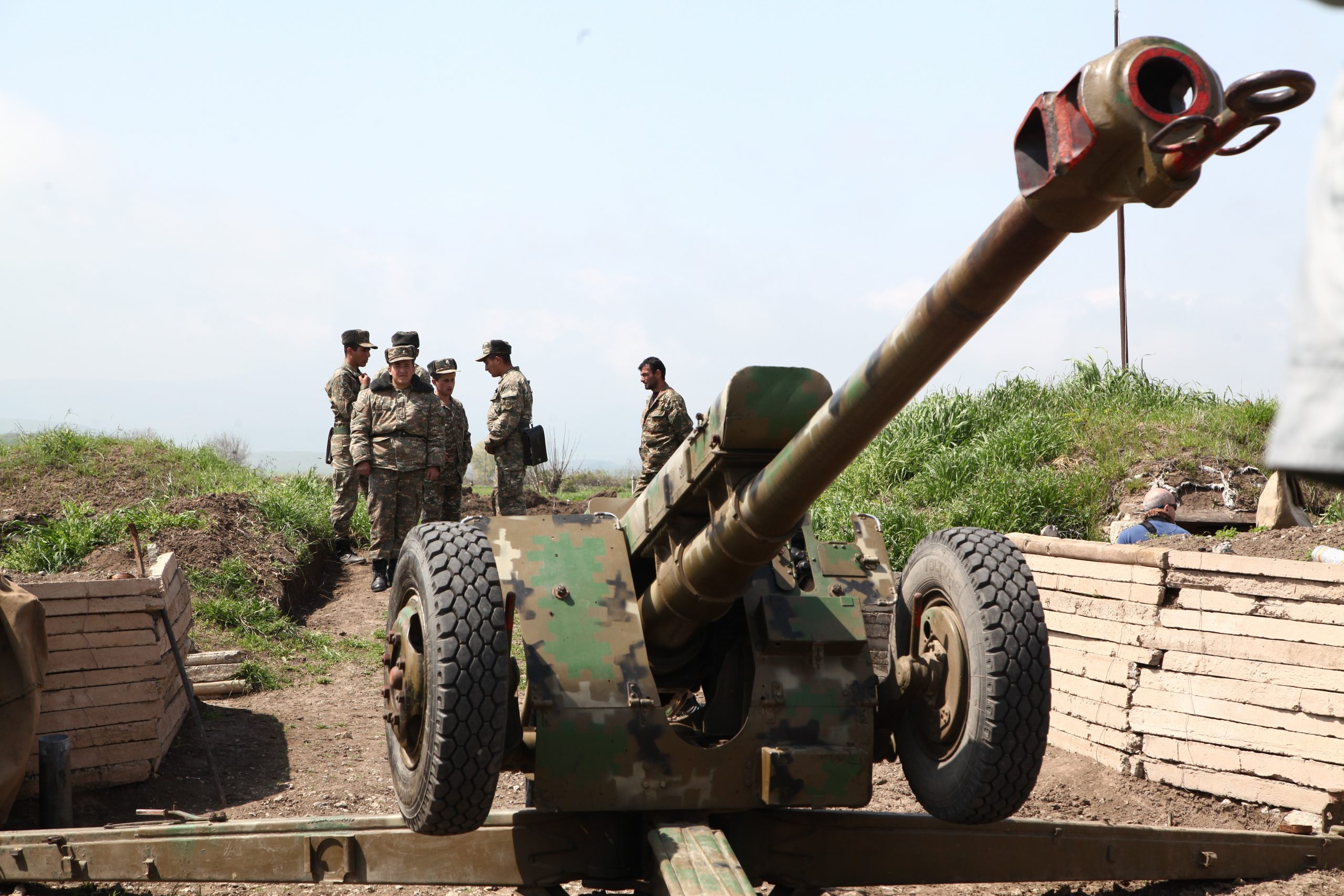 Developments on the battlefield

Twenty-two days into Karabakh war, there is still little verified information from the battlefield. In its attempt to reconstruct prior events and to assess the situation in the fighting zone online platform „War on the rocks” identified several stages of the ongoing war.

First three days were characteristic by an attempt of Azerbaijani troops to conduct a blitzkrieg by a ground assault with armoured formations while providing fire support with artillery, drones, and loitering munitions. Armenian forces, however, managed to halt enemy’s advance, inflicting casualties with anti-tank guided missiles and artillery. Azerbaijan, on the other hand, managed to start „attriting Armenian air defence systems, destroying 13 short-range surface-to-air systems (Osa-AKM and Strela-10)“.

As authors further reported, „from the end of the third day until the beginning of the sixth day, the parties mostly engaged in position warfare, with the largest counteroffensive on the Armenian side taking place on the fourth day“.

The operation seems to be „mostly unsuccessful due to massive damage caused by Azerbaijani combat aerial vehicles, loitering munitions, and drones further marking targets for artillery“. Armenian forces „were left largely unprotected by the old air defence systems that they had available and suffered considerable losses as a result. The loss of as much as probably total of 84 tanks thus far by Armenia, along with numerous multiple launch rocket systems and artillery systems, compared to a total of 13 to 15 air defence systems, suggests a fairly low availability of air defence relative to the size of the armoured force fielded,“ claimed authors.

The sixth day of war was marked by exhaustion on both sides and shelling of Stepanakert followed by Armenian rocket attacks on Azerbaijan’s second-largest city of Ganja. At the same time, the increasing pressure of Azerbaijani forces in the north started, leading to alleged capture of Mataghis.

In following days, the fighting has shifted to the southern rayons of Fuzuli and Jabrayil as battles in the mountainous north „proved to be costly“ for Baku. Although the given territory is relatively flat and unpopulated and Azerbaijani troops might briefly capture Jabrayil, their advance in this direction has also stalled.

„In general Baku had managed to capture approximately 2.8 per cent of the disputed territory. Azerbaijan appears to have the capacity to destroy Armenian ground forces from the air, largely thanks to its unmanned aviation, but at the end of the day, only ground forces can seize and hold terrain. Tactical successes have not yielded a notable operational or strategic victory, and Baku’s path towards achieving political objectives via the battlefield remains unclear,“ concluded authors.

As OC-media informed on October 15, the Armenian Ministry of Defence confirmed at least 604 causalities among military personnel. Although Azerbaijan does not release the number of deaths among their troops, Yerevan published on October 11 a list of 517 Azerbaijani soldiers whose deaths they say they were able to confirm by name.

As Neil Hauer stressed in his assessment of possible developments on the battleground for the Asia Times, the land shall be soon covered by snow, and offensive operations will „bog down“. „The Azerbaijan Armed Forces are thus on a clock. They have just a few weeks to advance as much as possible before weather conditions alone make further progress all but impossible,“ wrote Hauer.

As the war proceeds, rating of Russia among Armenians is growing

While continuous hostilities in Nagorno Karabakh have led to a lower rating of most relevant countries by Armenian society, the overall impression of Russia has improved, found Gallup poll from October 7.

The reaction of Russia to the war in Nagorno Karabakh was seen positively by 50% of respondents, increasing by 7,5% in comparison to a similar poll from September 30.

On the other hand, approval of Belarus (32,5%) and Ukraine (25%), which supplied weapons to Azerbaijan, fell sharpest by 12,5 and 7,5 per cent respectively. Assessment of Georgia is generally among the lowest with only 12,5 % respondents viewing it positively.

As Ani Mejlumyan wrote for Eurasianet, „even many traditionally pro-Western figures have been coming out more in favour of Russia these days“, noting that there have been „signs of a greater accommodation to Russia“ even on behalf of the government. The most important was the removal of the head of the National Security Service, who only had been appointed in June and was perceived as anti-Russian.

„So, one step has already been taken towards Russia,“ said Hovhannes Iskhanyan, an independent documentary filmmaker. „And the fact that people of American influence have started making pro-Russian speeches means that there are serious discussions inside the political elite to change the anti-Russian propaganda by 180 degrees,“ he told Eurasianet.

Only 320 respondents were questioned in the latest survey, as a result of the martial law, giving 5% margin of error. 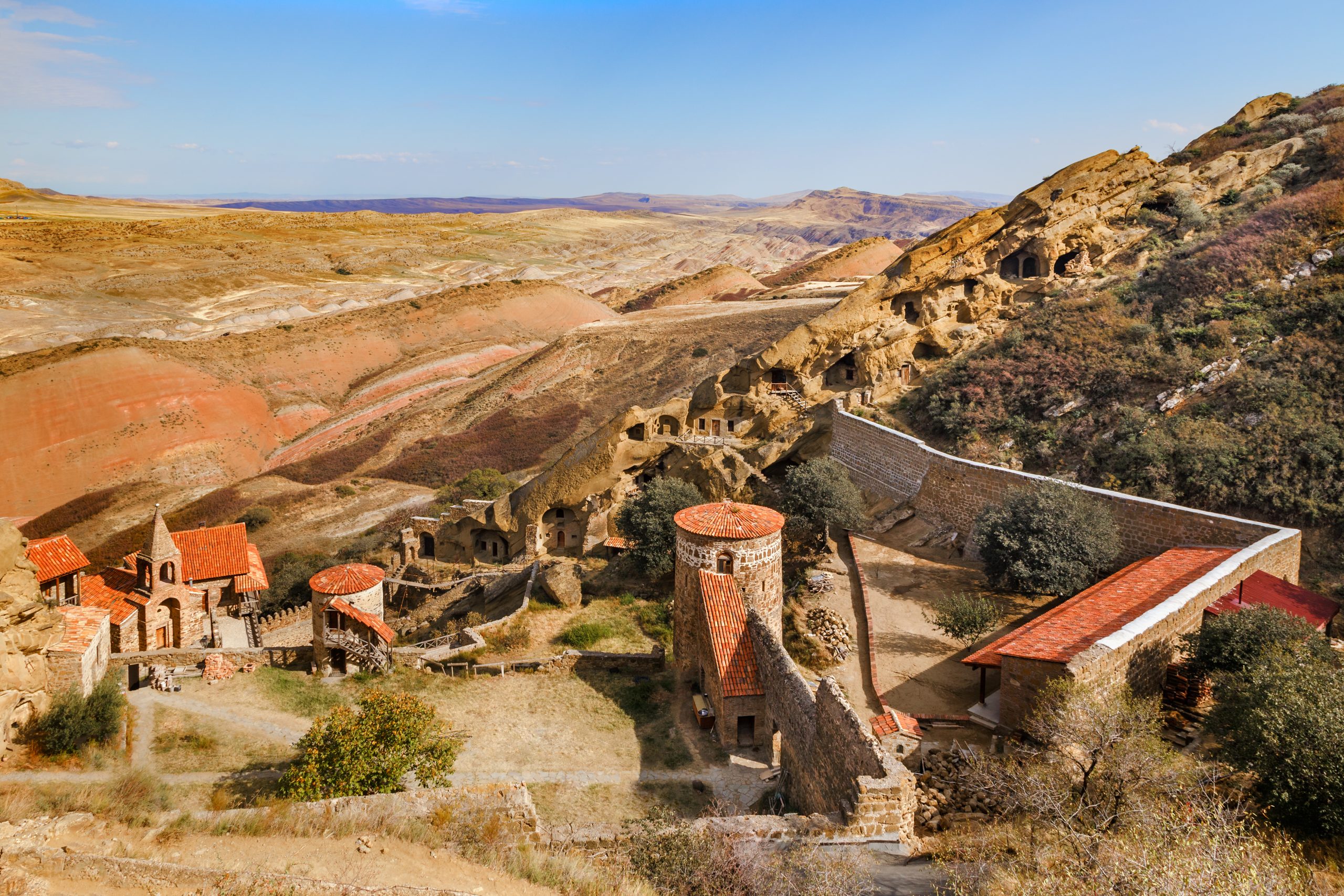 Georgian police have detained two former members of the state commission for border demarcation and delimitation in connection with the investigation to illegal forfeit of Georgian territories in favour of Azerbaijan under the Saakashvili government. Local NGOs consider investigation to be politically motivated to undermine the main opposition party the United National Movement in the runup to parliamentary elections.

As JAMnews wrote, investigators believe that the state commission, which worked under the former government of Mikheil Saakashvili, hid a vital map, as a result of which a specific part of the territories belonging to Georgia by right was to be transferred to the Azerbaijani side.

Saakashvili has called the investigation „a cheap Russian operation“, slamming the investigation as a „long-planned provocation“ by the ruling Georgian Dream to blame his former government for transferring territories to Azerbaijan ahead of upcoming parliamentary elections on October 31.

As civil.ge noted earlier, two-thirds of the border between Georgia and Azerbaijan have been settled, while the remaining one-third of the border, where the medieval David Gareja Monastery complex is located, has yet to be agreed. Lack of agreement on where the border passes came into a sharp focus in April 2019, when Azerbaijani border guards restricted access to parts of the Monastery.

On October 9, the Venice Commission of the Council of Europe has expressed worries that the Georgian parliament did not wait for its assessments before adopting amendments to the court system in September 2020.

Although the commission appreciated some of its clauses and in particular, the decision to abolish voting by secret ballot during the selection competition, it also noted that additionally disclosing the identity of High Council of Justice (HCoJ) members and their voting decisions would provide greater transparency.

„The Venice Commission was willing to assist the Georgian authorities in reforming the system of the appointment of Supreme Court judges in line with European standards and meeting the domestic calendar. However, owing to the extremely limited amount of time it disposed as a result of the belated opinion request, the commission could not but limit the scope of its analysis of the draft amendments to the examination of whether its previous recommendations had been met in the draft amendments under consideration,“ read the statement of the commission.

As the Caucasus Watch reported, a few days earlier the spokesperson for EU’s external affairs Peter Stano also expressed his regret that the Georgian parliament did not wait for the opinion of the Venice Commission before passing the judicial reform law.

Meanwhile, in a  statement published on October 9, the co-rapporteurs of the Parliamentary Assembly of the Council of Europe (PACE), Titus Corlăţean (Romania, SOC) and Claude Kern (France, ALDE), stressed the necessity to implement the remaining Venice Commission recommendations, reported civil.ge. 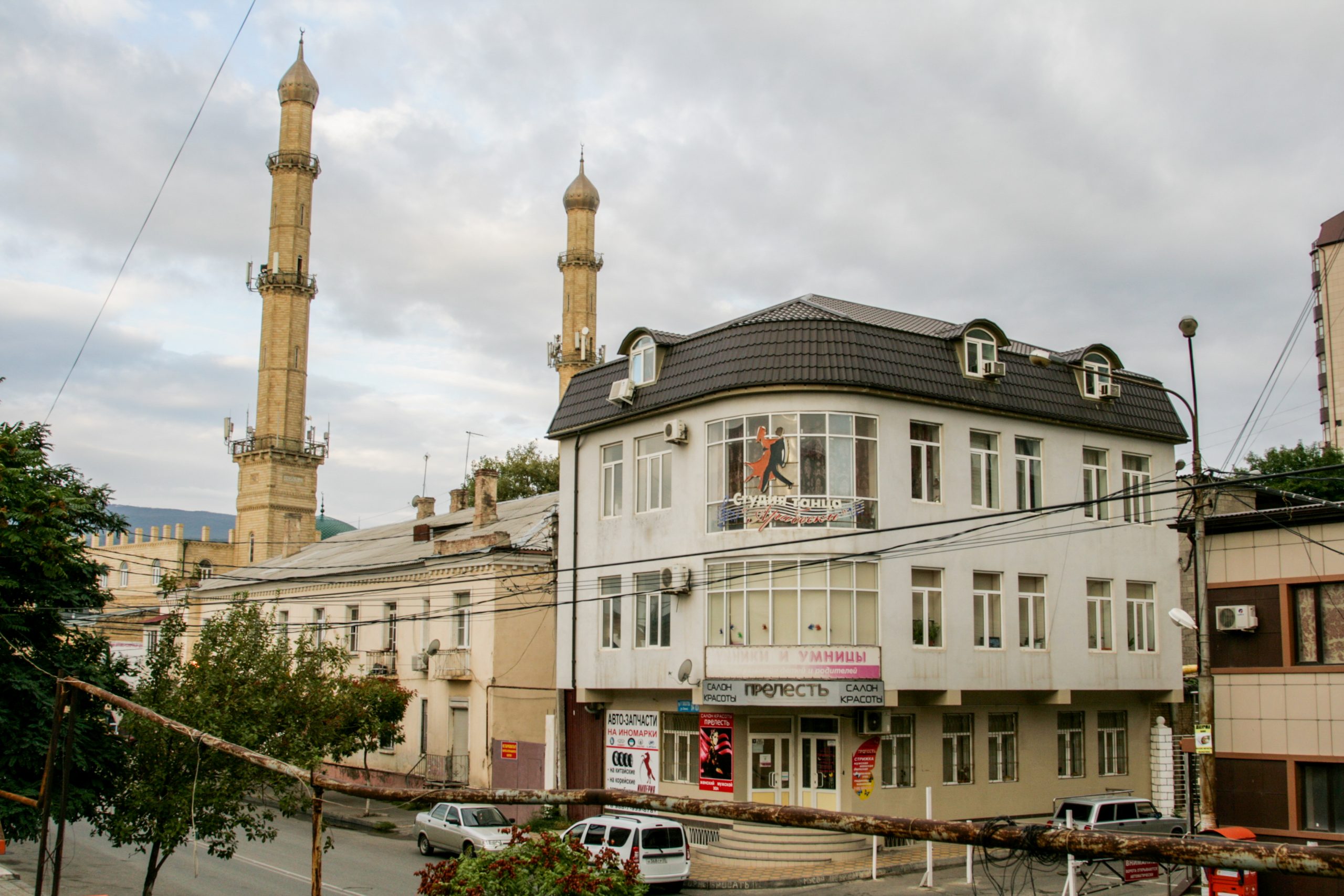 Dagestan: New acting head of the republic, old ways of ruling it?

Dagestan, one of the most volatile regions of Russia, has a new acting head – Colonel general Sergey Melikov. Experts agree that by naming Melikov, Kremlin continues to pursue the policy of nominating outsiders with a background in security forces and no connections to local clan structures as heads of this crucial federal subject.

The Kremlin said in its statement from October 5 that Russian President Vladimir Putin signed a decree accepting the request of the former head of Dagestan Vladimir Vasilyev „to relieve him from his duties.“ The statement added that Sergei Melikov was appointed as republics‘ acting leader.

Vasilyev, at that time 68, was appointed in a surprise move by Putin in 2017. He was the first outsider to head the Republic of Dagestan. As Radio Free Europe reminds, Vasilyev, who served as a police lieutenant-general and a former deputy interior minister, was expected to eradicate deep-rooted corruption in this region. There are signs that Vasilyev, who had not been successful in his task, stepped down due to health issues.

Melikov, although ethnic Lezgin (ethnic group native to south Dagestan and north Azerbaijan), can also be considered as an outsider to the republic since he was born in Moscow oblast and he has no direct links to any of local clans. Nevertheless, he is well familiar with the region and its complicated realities, considering that he served as presidential envoy in the North Caucasus Federal Territory between May 2014 and July 2016.

Local journalist Maksim Shevchenko told the correspondent of the news portal Caucasian Knot that Melikov „has long been known in the Caucasus for his tendency to rule by hard power, although he himself, in principle, is not a bad person, despite the fact that he behaves like a (typical) general“. In general, he often evokes sympathies by his humane approach, added Shevchenko. The journalist also believes that nomination of ethnic Lezgin as head of the republic might signalise the definitive end of Avar domination in Dagestan’s politics and shifting of the centre of the power to southern Lezgin regions.

Chechnya witnessed the first regime of counter-terrorist operation since 2016

Security forces have killed four suspect terrorists in Chechen capital Grozny on October 13. According to Chechen leader Ramzan Kadyrov, the alleged militants, who arrived from abroad, were planning a series of terrorist attacks.

As the Caucasian Knot news portal informed, on October 13 in the Oktyabrsky district of Grozny, a counter-terrorist operation regime was introduced for the first time since December 2016. The security forces blocked the house in which, according to their information, the alleged militants were hiding. The following shootout claimed lives of four suspected militants, two officers of the National Guard and one policeman.

Three natives of Chechnya killed during the special operation were probably members of one of the last forest jamaats led by Aslan Byutukaev, a well-informed source told the Russian press agency Interfax.