China and its impact on the EU accession process of Serbia

The Western Balkans region seems to be a “battleground” on who will have more impactful influence in the region – the Western powers, mostly represented by the European Union (EU), Russia, or China. It seems that the most sought-after country in the Western Balkans is Serbia, which is both the biggest and the most economically developed in the region. Serbia has also received the highest amount of Chinese investment in the region since 2013, estimated at around 18 billion € (Balkan Investigative Reporting Network, 2021). More importantly, Serbia is not choosing sides when it comes to its political alliances. Despite having EU membership candidacy status and declaring its intent to join the EU eventually, Serbia has been continuously criticized for tactically navigating its relations with the EU, China, and Russia (European Council on Foreign Relations, n.d.).

„Serbia is not choosing sides when it comes to its political alliances. Despite having EU membership candidacy status and declaring its intent to join the EU eventually, Serbia has been continuously criticized for tactically navigating its relations with the EU, China, and Russia“ 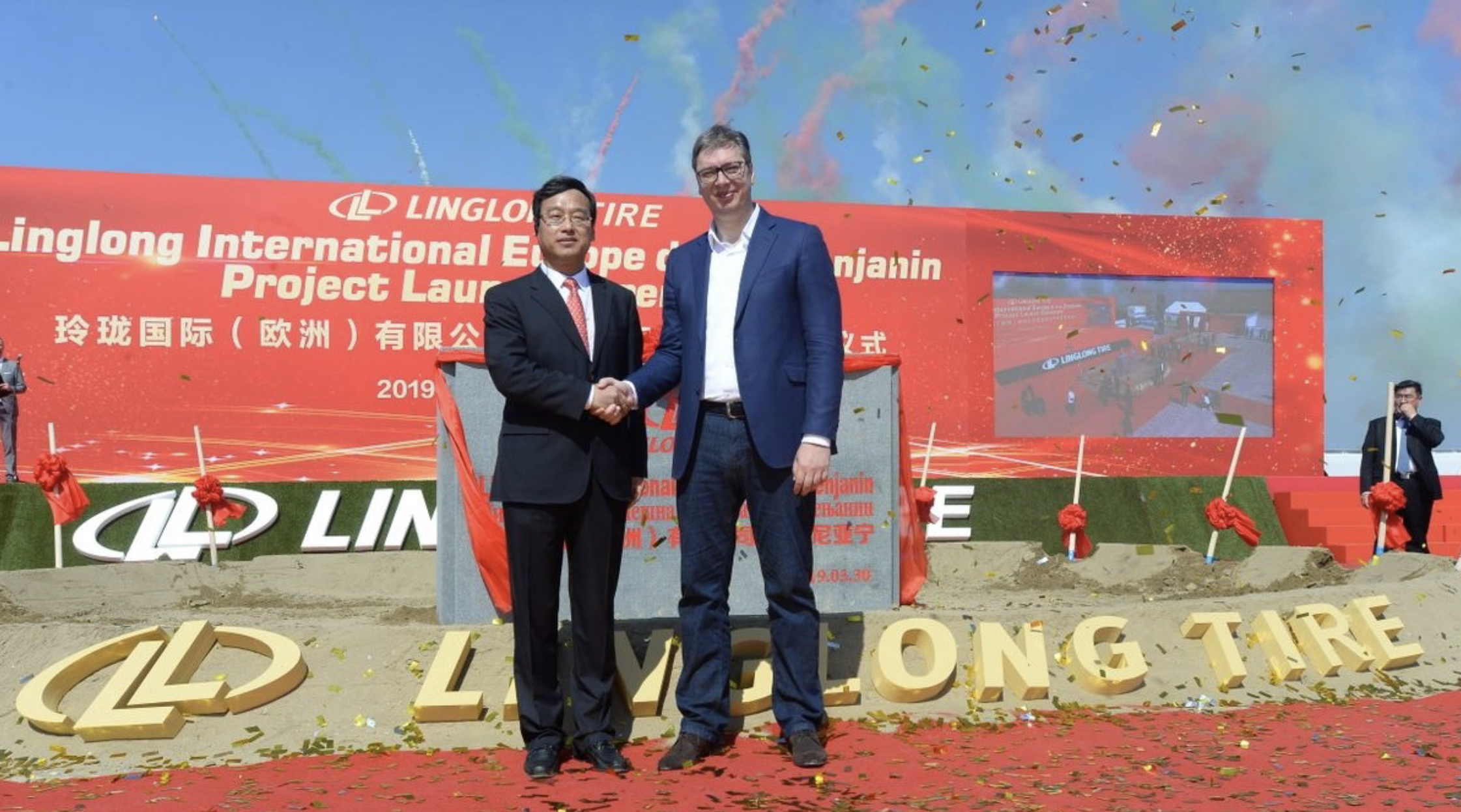 Serbian President Aleksandar Vucic with the representative of the Linglong company laying the foundation stone of the factory. Photo: Presidency of Serbia

The rise of Chinese influence in the Balkans started during the worldwide financial crisis around the year 2009, mainly to spread cooperation between Europe and Asia and, in return, increase the trade relations between the continents. Chinese financial investments are not based on conditionality, they have a “no strings attached” approach, which makes them attractive to the  Balkans, who are seeking to receive capital, increase the employment rate, and close the development gap between them and the rest of  Europe. However, Chinese loans are overridden with corruption, human rights violations, and lacking transparency. Meanwhile, the EU conditions its loans with several requirements and bureaucratic hurdles to avoid such misconduct (Stanicek & Tarpova, 2022). In Serbia, China has mainly invested in the infrastructure sector – building and renewal of roads, bridges, and railways. An important strategic investment in this area is the Belgrade-Budapest railway, which is part of the Chinese New Silk Road strategy and would open a new path for Chinese products in Europe through the Western Balkans (Dimitrijević, 2017). However, China has also branched out in its investment – through its state-owned companies, China bought or invested in several companies in Serbia, among which are steel, tire and mineral extraction companies (Markovic Khaze & Wang, 2021).

This economic partnership soon evolved into a political one. The Serbian government officially defines its relationship with China as a comprehensive strategic partnership needed “for closing the development gap with the rest of South-East Europe and the EU” (Zweers et al., 2020, p. 28). In 2017, Serbia introduced a visa-free regime for Chinese citizens (Hartwell & Sidlo, 2017). Moreover, the partnership is more than warm, which can be seen in the narratives on China in Serbian media. However, it is important to note that the Serbian Ministry of Culture and China’s State Council Information Office signed an agreement on media cooperation, reducing critical views on China and instead praising its authoritarian government and political system. In return, China helps Serbia spread the narrative that Kosovo is part of Serbia and blocks Kosovo from becoming a member of the United Nations.

„Chinese financial investments are not based on conditionality, they have a “no strings attached” approach, which makes them attractive to the  Balkans“

„The EU realizes that China has become a “systemic rival promoting alternate forms of governance” in the Western Balkans and, most importantly, in Serbia, where Chinese presence can be detected the most“

„A friendship of steel ?“

Moreover, most Serbian media is under the influence of the government, and they help spread positive narratives about China (Stanicek & Tarpova, 2022). The narratives are highly praising and uplifting, with headlines often depicting the Sino-Serbian partnership as a “friendship of steel” or “brotherly love” (European Western Balkans, 2021). For this reason, the public perception of  China has changed dramatically. In 2005, only 3% of people had favourable views of China, while in 2018, China received a substantial growth to 56% (Conley et al., 2020). Therefore, China´s increased financial investment in Serbia over the last decades has resulted in elevated Chinese soft power, in part thanks to the positive promotion by the Serbian government and the pro-government media.

The EU realizes that China has become a “systemic rival promoting alternate forms of governance” in the Western Balkans and, most importantly, in Serbia, where Chinese presence can be detected the most (Mardell, 2020). Serbia has received criticism from the EU for stating that Chinese large long-term investments must adhere to the EU standards, as Chinese “no strings attached” approach to investment reinforces corruption and undemocratic practices, which are problematic especially for emerging democracies like Serbia (European Commission, 2022; Zweers et al., 2020). Furthermore, in December 2021, the European Parliament adopted a resolution acknowledging the growing number of contracts between China and Serbia, noting the existence of legal privileges for China granted by Serbia, and the application of Chinese labour law in Serbia, as there were reports of forced labour, dangerous working conditions, and human trafficking in a Chinese-owned factory in Serbia. The resolution implored Serbia to align and comply with the EU labour laws and questioned the environmental damages, corruption and lacking transparency involving Chinese projects and companies in Serbia (Stanicek & Tarpova, 2022).

To conclude, China’s impact on Serbia’s economy and development has undergone a significant increase in the last few years, however, it is not anywhere near the impact the EU has on Serbia (Markovic Khaze & Wang, 2021). On the other hand, Chinese soft power surpasses the EU´s, which should be particularly worrying for the EU, as Serbian politicians also fuel negative views towards the EU, and the pro-government media help them with spreading this discourse while praising China and also Russia. If Chinese non-conditionality continues with its financial investments, corruption, non-transparency, and other misconducts will continue, thus solidifying undemocratic practices and democratic backsliding in Serbia, which would potentially impair the reforms Serbia has to undergo to fulfil the EU accession criteria.

Lýdia Chobotová is a student of  European Studies at Comenius University in Bratislava, and an Intern of the Strategic Analysis  Young Leaders Programme.