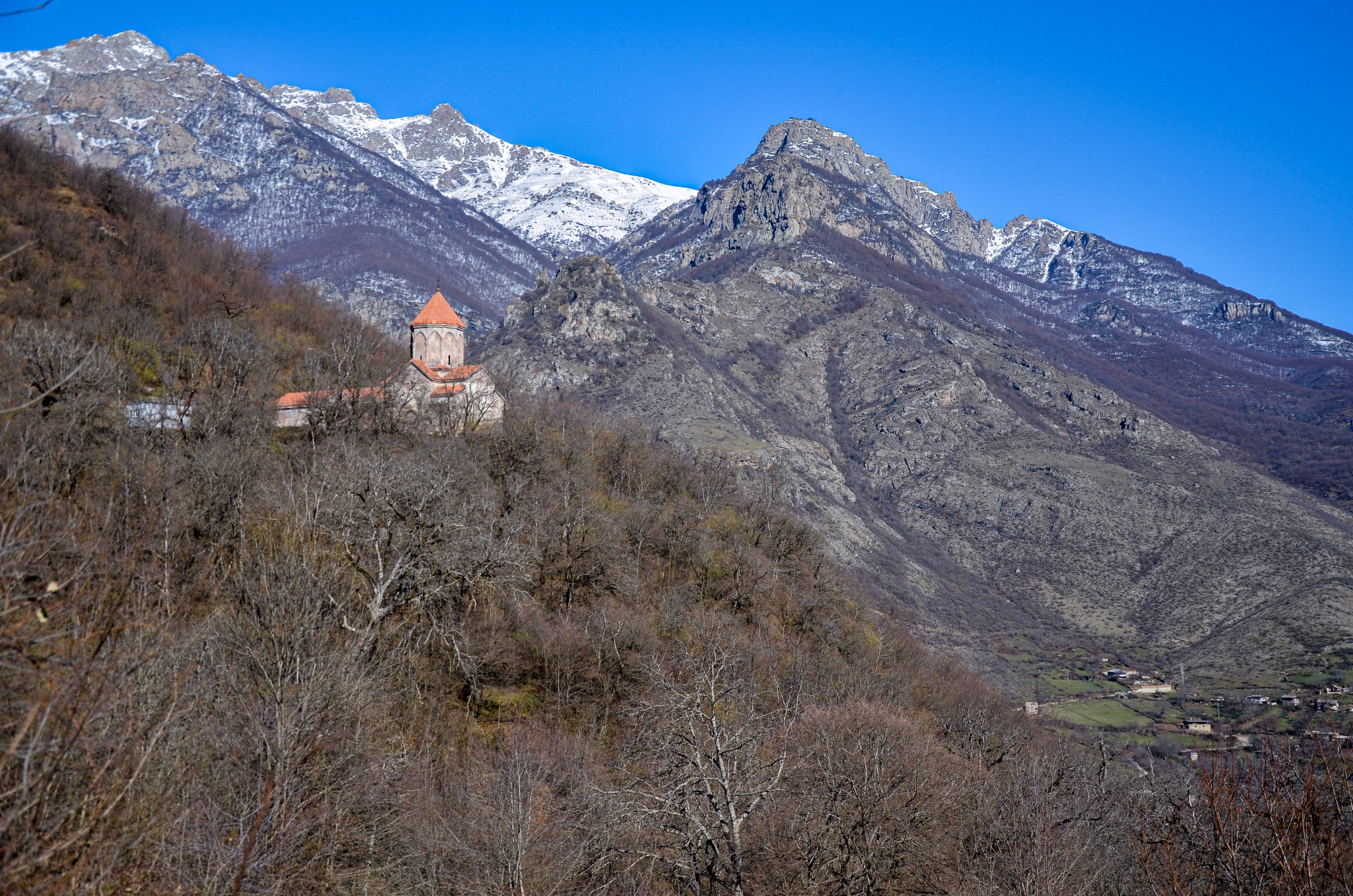 On August 25, 2021, the Azerbaijani army blocked a section of the Goris-Kapan highway and stopped cars with residents of Armenia for several hours. On the following day, Baku forces blocked another highway section. The blockade was finally lifted on August 27.

The incident started shortly after the Azerbaijani State Frontier Service reported an attack of Armenian militaries on a border guard in the territory of the “Gubadly” border combat point, with Armenia refuting the accusations.

Besides stopped traffic, residents of the villages of Vorotan, Shurnukh and Bartsravan were left without motor communication and vital supplies as a result of restrictive measures adopted by the Azerbaijani army.

According to Gevorg Parsyan, the Mayor of Kapan, motor traffic on the Goris-Kapan highway has resumed after negotiations with the participation of Azerbaijan, Armenia and Russian peacemakers.

As OC Media reminds, the Goris-Kapan road is one of Armenia’s major roadways and connects central and southern Armenia. The road is also vital for Armenian trade with Iran.

Roughly 20 kilometres of the road, which winds its way near the Armenian-Azerbaijani border, ended up under Azerbaijani control after the Second Nagorno-Karabakh War. The exact borders between Armenia and Azerbaijan have yet to be delimited or demarcated and so remain in dispute.

Erdogan hinting willingness to work on normalization of relations with Armenia

On August 29, Turkish President Recep Tayyip Erdogan has announced his willingness to work towards normalization of relations with Armenia, informed Public Radio of Armenia.  “We can work to gradually normalize our relations with the Armenian government that has declared its readiness to move in this direction,” the Turkish President told reporters.

Turkish leader added that „there is a need for new and constructive approaches in the region“, stressing that existing differences in opinion and expectation might be solved by „sincere effort“.

Erdogan also congratulated Armenia for its newly-established government, expressing hope that the new government would be beneficial to the region.

Erdogan’s remarks arrive after Armenian Prime Minister Nikol Pashinyan said earlier that Turkey had been sending “positive signals” to his country and that Yerevan will respond in kind.

As Ahval News reminds, diplomatic ties between Turkey and Armenia are officially non-existent and have historically been hostile. Turkey closed its border with Armenia in 1993 in response to the First Nagorno-Karabakh war

The serviceman of the Azerbaijani Armed Forces Jamil Babayev was found in one of the apartments in the city of Martakert in Nagorno Karabakh on August 25. He now faces several charges.

Babayev was detained by de facto Law enforcement agencies of Nagorno-Karabakh in one of the apartments in the city of Martakert, writes JAM News. He allegedly threatened the children in the house and demanded food.

Azerbaijani serviceman is now accused of espionage, illegal crossing of the state border, and threatening underage residents of the said apartment with murder.

The Georgian government has said on August 31 they would not seek funds from the EU’s Macro-Financial Assistance programme, citing recent economic growth and a will to address the country’s external debt. The decision follows pressure from the EU on Georgian officials to pursue agreed reforms, writes OC Media.

„We are grateful to the EU for all their help that they provided during the pandemic, and generally, for everything they are doing for us. We have already decided to abstain from taking this second instalment as a debt,“ said Georgian Prime Minister Irakli Gharibashvili. The PM underlined that the upcoming €75 million from the EU was „not a grant or help“, but „debt“, as was the previous instalment.

PM Gharibashvili accused the opposition of pushing the EU towards using the conditionality mechanism, noting that “our opponents have moved to the regime of sabotage to somehow… hinder our course towards the West”.

Gharibashvili’s decision was followed by criticism from MEPs Viola von Cramon (The Greens/EFA, Germany) and MEP Andrius Kubilius (EPP, Lithuania). Von Cramon argued on her Twitter that Georgia had not fulfilled the conditions anyway. “You can’t decline what you were not eligible for,” she wrote.

Georgian PM reacted with a statement that „a Member of the European Parliament is not his boss”. “Our bosses are the Georgian people,” the PM stressed, adding, “if they [MEPs] are actually interested in understanding the situation and the substance of the issue, they should look into it instead of making shallow statements,” he added.

In their turn, Georgia’s major opposition parties addressed European Union and NATO leaders with a joint letter, stressing that the Georgian Dream government’s “confrontational” refusal of the loan from the EU, conditioned on court reform and upholding Brussels-mediated April 19 deal, “constitutes the latest in a cascade of events that aim to thwart Georgia’s Euro-Atlantic path”.

Also, the Georgian President Salome Zurabishvili has stated it is unclear for her and the public why the Georgian Dream government has refused to take the second tranche of the EU’s 150 million euro loan, which should have been addressed to decrease “the social and human damage that COVID has done to our population”.

Zurabishvili said that the reason cited by the government for the refusal – positive moves in the state economy and the wish to decrease the country’s foreign debt – is weak. She also said that “such unilateral decisions” affect the country’s reputation and discourage investors.

The Party Chairman Nika Melia said in his address late on September 1 that recent statements by the ruling party refusing EU’s macro-financial assistance led the opposition party to take this step, despite certain “unacceptable” provisions in the document.

According to the party chair, the UNM joins the agreement so that “western partners do not distance themselves from Georgian people due to the unreliable government”.

The willingness of the biggest opposition force in Georgia to join the EU brokered deal was welcomed by the EU ambassador Carl Hartzell. “It is never too late to sign up to what is, essentially, an important roadmap for democratic reforms,” said Hartzell adding that 147 out of 150 elected Members of the Georgian Parliament have, at one stage or another, supported this agreement and all of its contents”.

The Georgian Prime Minister Irakli Garibashvili has responded that the decision of the UNM to sign the agreement after more than four months since the document was signed by other parties „is a farce and lie“.

According to the SSG statement, the suspects „became members of the terrorist organization Islamic State” and planned to travel to a “terrorist camp” in Syria. They had taken the oath of allegiance (bay’ah) to the current leader of the Islamic State and spread video footage featuring the oath among persons with “links to terrorists,” the report said.

The Security Service noted that the group members “openly expressed their support for the terrorist organization and systematically demonstrated terrorist symbols while moving in the streets”.

The names of four out of five detainees are known: Magomed Machalikashvili, Yusuf Tsatashvili, Gamza Bagakashvili and Ramaz Kavtarashvili. They are from 18 to 20 years old. The name of the fifth one was not disclosed; presumably, he is accused of organizing the grouping that had taken an oath of allegiance to the IS.

The detainees’ relatives deny their guilt, calling them devout Muslims who often visited the mosque and “peaceful children”.

Russia to modernize the 7th military base in Gudauta

The arsenal of the Russian 7th military base in the Georgian city of Gudauta (in the breakaway Abkhazia) will be significantly updated, said the Russian ministry of defence.

The base will receive modernized BMP-3 infantry fighting vehicles, as well as reconnaissance drones, and the soldiers will be re-equipped with the most modern version of the Kalashnikov assault rifle, the AK-12.

At the moment, the 7th military base is armed with modernized T-72B3 tanks, BTR-82A wheeled armoured personnel carriers and 152-mm Akatsia self-propelled artillery mounts, as well as anti-aircraft systems. In addition, the base is reinforced with S-300 long-range air defence systems.